“We are an historic congregation celebrating over 180 years of service: 1835-now.”

“Our faith is over two thousand years old-Our thinking and our vision are not.”

Westport Presbyterian is a dynamic spiritual organization supported by a diverse community.

The mission of Westport Presbyterian Church is to discern God’s activity in the new millennium; to follow Jesus in ministries of service, healing, justice and prayer; and to make the city a better place for people to live, work and worship.

The Westport Cumberland Presbyterian Church was founded in 1835. A brick building was erected on the site of the current building in 1896. On January 11, 1903, that building burned to the ground. The present stone building, including the sanctuary, chapel and rooms upstairs, was dedicated on October 2, 1904. The church celebrated its 150th anniversary in 1985 and its 175th anniversary in 2010.

On Dec. 28, 2011, a terrible fire completely destroyed the church, the sanctuary, chapel, and the large three-level building known as the Goodman Building.  Fortunately no one was killed or injured. 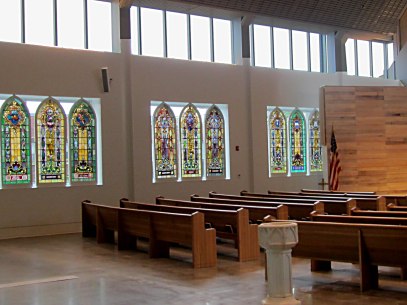 The renovated sanctuary and chapel are bright and airy, with a raised ceiling that contributes to the space’s open and uplifting character. Fortunately, the church was able to save and restore the original windows from 1904 as well as the Willet windows installed in the 1950’s.

In 2016  the new organ built by the Pasi Organ Builders of Roy, Washington was installed.

Each of the windows from the lovely 1904 sanctuary is still held within its original wood frame, and hung in front of a protective larger glass window.

The windows on the west wall face outside the building and receive abundant natural light.

However, the set of triple-paneled windows on the east wall no longer face the outside and lack natural illumination, which makes it difficult to appreciate their beauty. Hopefully, some additional lighting will be installed to improve their visibility and balance the appearance of the complimentary windows on the west wall.

Of note also, the two double-paneled windows on the north wall, facing Westport, are “reversed.” These windows,  designed by the Willet Studio of Philadelphia in the mid 1950’s, are installed so that the text might be easily read from the outside of the church. As a result, when viewed from inside the church, the words on these two double-paneled windows are seen as a mirror image of themselves.

The lovely chapel area at the south end of the sanctuary also has several windows designed and fabricated by the Willet Studio in 1948-1952. 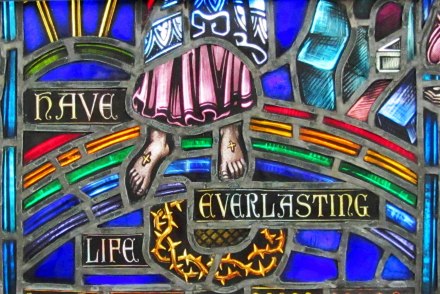 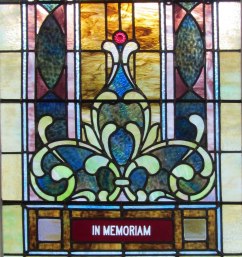 Westport’s restored church and windows preserve its important heritage as a place of spiritual inspiration and its dedication to the memories of those who have lovingly contributed to the growth and maintenance of this important community resource.